a. The history of the “Fairbairn-Sykes Fighting knife.

In order to appreciate the complete history of the F-S fighting knife, which was given to the Commandos during World War II, we must go back in time, notably to Shangai in China.

There, William Edward Fairbairn and his friend Eric Anthony Sykes trained and led the sections of the Shangai Municipal Police Force, among others the riot squad and the sharpshooter units which belonged to the corps.

These units were essential in the fight against criminality in this agitated town – Shangai was known as the most dangerous town in the world, where armed attacks, murders, exactions, kidnappings, seizures of hostages and riots occurred every day.

Fairbairn joined the Shangai police in 1907 after serving some time in the “Royal Marines”. As his talent for this kind of job was recognised after a short time, he was rapidly promoted and finally became an assistant police superintendent in 1935.

He got a pension in 1940, a short time before the World War broke out. In 1910, Fairbairn has been appointed as a shooting and drill trainer. Until his retirement, he led and continuously improved the methods the Police Corps used to fight criminality. They comprised fighting without arms, self-defence with truncheon, knife and pistol. During all that time, he had taken part in more than 200 skirmishes with criminals.

This was surely a good way to improve the fighting methods he had to teach the officers under his command.

First, he improved a system of more realistic shooting exercises. Instead of shooting at fixed targets as it was the compulsory custom at the time, he introduced a method of shooting at moving targets.

About 1920, he met Eric Sykes. They formed a close team which proved to be very efficient for the war department 20 years later.

They taught how to fight hand to hand and use a revolver or a tommy gun. Captain P.N. Walbridge explained the gun and bayonet use. Together with other trainers, they formed a unique team.

Soon, commando units appeared but, in the beginning, no fighting knife was provided. At that time, the use of the various types of knives was very limited. Besides, many commandos had their own weapons, among which some “treasures” dating from World War I.

Fairbairn and Sykes pointed out that if a specific weapon was to be made, it should meet the requirements of the commandos when they would be involved in a hand to hand fight.

Their experience gained in Shangai showed that a knife would be made. It would be carried in such a way that the soldiers could use it rapidly and efficiently. Braids were sewn on the sheath so that it could be fixed on the clothes.

A heavy handle was required to give the user a firm grip and a certain touch. The point of balance was placed at middle finger height to give the knife accuracy and mobility.

The 7 inches blade which was sharpened on both sides enabled the user to cut and thrust while with the point he could strike rapidly and deeply. The steel of the blade was cast up to the pommel of the handle, which was also used to strike.

The knife was first intended for “silent killing” or in a hand to hand fight when it was impossible to use a firearm.

Some critics did not understand anything about the aim of that weapon. It was ideal for its main use: to kill a sentry.

Fairbairn and Sykes visited the factory in November 1940 and with John Wilkinson – Latham they perfected the shape which has become so well-known. The first 500 knives were made by hand out of the best black steel. The next model and the third one were mass-produced, as a large number was necessary, but their quality was less good. Many other producers in Sheffield, Birmingham and London joined Wilkinson Co in the production.

The knife had a sharp blade of 7 inches, a 5 inch crenellated bronze handle and a S shaped nickel hilt was made. The blade was brilliant. This was made on purpose: when the knife was used, the light reflected on the blade to frighten the enemy, who would lose confidence and surrender. The following models were painted in matt or black varnish to be unnoticed during the night. The first model was produced about January 1941. The knife and the sheath cost 13 shillings and 6 pence (4 € 50).

The knife is as unique as the first men who used it in fighting.

The first commandos, as their knife, were very exceptional.

These knives were used in battle by units of many nations among which the British army, the marine commandos, the 10th Interallied commando, the British and Canadian Parachutists, the Special Operations Executive, the Strategic Services Bureau, the Home Guard auxiliary units, the S.A.S., the long range desert patrol, the Chindits, the American Rangers, the Marauders, and even the Ghurka units. 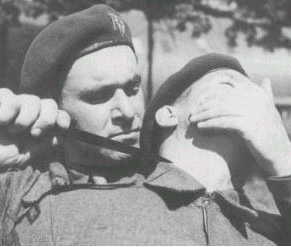 Where it was carried and used, it caused fright and terror among the enemies while it brought courage and self-confidence among the users.

The knife is now part of the legend of the Allied Forces Commandos and will always be a kind of homage to their feats as well as to its designers William Edward Fairbairn and Eric Anthony Sykes, two particularly gifted men, who in their time were forerunners.

b. The personal collection of Alexis Laykoff. 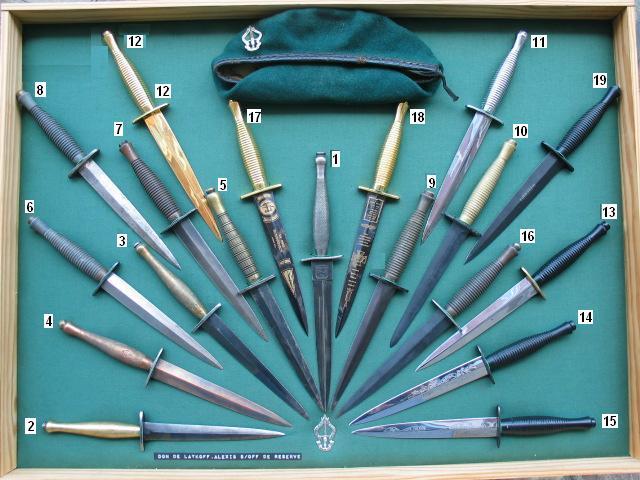 c. Evolution in the course of time.

It is also necessary to know that the prototype of the dagger was made from the LEE-METFORD bayonet (1888) in Great-Britain.

In a similar way, the trench daggers of the 1914-18 war were made from GREENER bayonets.

We find another origin among Mod. 89 Belgian bayonets, picked up on the 1914-18 battlefields, which go to Great-Britain to become trench daggers and come back to the front in 1916.

We are at a loss…

What can we say to explain the whys and therefores about the dagger. When we consult 6 records, we discover 6 different versions… The more we search, the more we flounder.

But all your information is welcome.

e. The collection of the Commando museum. 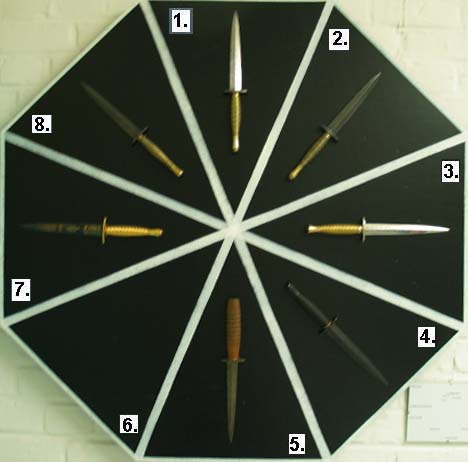 Return to the page of index